Blockchain technology enables the secure exchange of data between a multitude of players. This can be extremely useful in terms of accelerating global raw material transactions, an area in which “paper” exchanges remain the rule.

New cars sold today have more on-board connectivity than an airliner, and drivers are carrying around some of the most versatile networked devices in the history of technology – smartphones – in their pockets. In a range of other areas, too, previously isolated objects are integrating into the Internet of Things (IoT): from refrigerators and heating systems which can be remote-controlled through to locks which don’t need keys, the promise of a “smart world” is now within our grasp.

Yet unless the risks this level of connectivity entails can be dealt with, consumers, judiciaries and governments will – quite rightly – remain sceptical. Who would want to ride in a self-driving car or live in a smart home which could be easily hacked? Even in pioneering markets favourable to innovation, consumers are already concerned about data privacy in fraud-prone areas like banking. In view of the high standards of data protection many jurisdictions demand, notably Europe, companies, too, remain hesitant about deploying smart applications.

By defining and enforcing rigorous cybersecurity standards and combining these with their mechanical expertise, providers of testing, inspection, and certification (TIC) can respond to this trust deficit. Bureau Veritas has been verifying data protection procedures for over 30 years now, and offers mechanical and electronic testing across a range of industries. As such, Bureau Veritas is in a strong position to offer inspections for one of the most technologically complex and safety-critical areas of the smart world: connected cars.

V2X: The future is here

Bureau Veritas is responding to a development known as “vehicle to everything”, V2X, in which cars communicate with people (V2P), infrastructure (V2I), and other vehicles (V2V) as part of a connected road traffic environment. If this sounds far-off, it’s closer than you might think: General Motors has already launched Cadillacs with V2X radio capability; Volkswagen, Toyota, and Ford are set to follow in 2019/2020. Meanwhile, an alliance of carmakers is developing a 5G LTE standard for the next stage in mobile network technology.

Tomorrow’s connected car will therefore be constantly transmitting and receiving data: safety sensors will communicate with the engine, the driver, and other vehicles. Meanwhile, the car as a whole will share data from a range of devices with the manufacturer, with traffic management networks, and potentially with licencing authorities, maintenance providers, and all manner of other partners.  The spread of platform-coordinated car-sharing, as car ownership increasingly gives way to a user-based model, will also mean that entire fleets of vehicles will be sharing detailed data with – and about – thousands of people per car and per lifecycle. 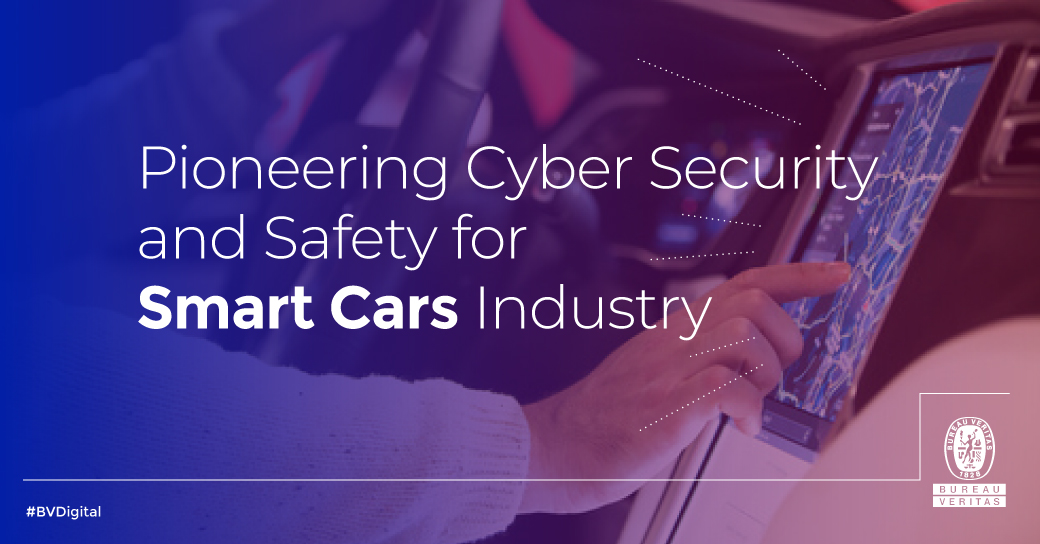 As such, all participants of the automotive value chain, from suppliers of components and carmakers to dealerships and, increasingly, tech companies will need credible proof that safety and compliance have been ensured. Bureau Veritas has already shown itself to be a strong automotive partner to many of them. Working with the US Transport and Environment Authority and Groupe PSA, for instance, it helped to implement a portable emissions measurement system which gathered data about actual fuel consumption from 60 vehicles over 40,000km to provide real-world economy and emissions findings.

Bureau Veritas is expanding on this position in automotive, producing a robust set of guidelines for cybersecurity in connected vehicles and acquiring Silicon Valley-based electrical and electronics TIC body SIEMIC; this complements its existing holding in 7Layers, a German specialist in mobile and wireless certification. Bureau Veritas will be able to add automotive cybersecurity to its existing certification services in the industry, offering whole-vehicle certification as cars become ever more connected – and ever more complex. With an end-to-end cutting edge offering, Bureau Veritas is strongly placed to service tomorrow’s autonomous vehicles.

Bureau Veritas’ automotive ambitions are part of the Group global ambition to cover all connected technologies on a worldwide scale, providing global consistency in TIC for everything from IoT to payment services. From a car parking itself in the garage or guiding you to keep the lane to a fridge automatically placing an order because the milk is running low, tomorrow’s consumers should be able to enjoy the convenience and promise of a smart world – without having to worry whether it is also a safe one.